Distinguished alumni to be honored by the Texarkana Texas Independent School District on Monday April 22nd.

A Student Leadership Breakfast will be held from 9:00 – 10:30 a.m. at the Dan Haskins Student Center at Texas High School.

The event will offer leadership students from Texas Middle School and Texas High School the opportunity to hear from the honorees. It will help them to learn first-hand how the example that you set for others, and for yourself, begins at an early age in order to build a strong foundation for personal and professional growth.

The two individuals will be presented and awarded the honor of 2019 Distinguished Alumni.  Seating is limited and reservations are required by contacting Tina Veal-Gooch at 903.794.3651 ext. 1013 or tvg@txkisd.net.

While at UT, Barnette’s work involved experimental and theoretical analysis of the exhaust blow-by effects on a rocket while exiting from a launch tube.  Additionally, he conducted Mach 5 tests in the UT high-speed wind tunnel for NASA-Johnson Space Center.  These tests simulated the bow and wing shock wave interactions near the wing root region of the then-developing U.S. space shuttle configuration.

Barnette was awarded his Doctor of Philosophy (PhD) in Aeronautics/Astronautics in 1984 from Stanford University.

His dissertation was on innovative solution algorithms for the finite-differenced parabolized Navier-Stokes equations used in supersonic flow computer modeling.

His professional career began with Sandia National Laboratories in Albuquerque, New Mexico in 1977 as a member of the Aeroballistics Division.

Barnette helped conduct and analyze wind tunnel tests while also working with 6-degree of freedom computer codes. This was for various nuclear weapon aerodynamic configurations.  Following a short break to complete his PhD at Stanford University, he returned to Sandia in the fall of 1983 to continue his work with the Aeroballistics Division.  In 1993, Barnette joined the Parallel Computational Sciences Department of Sandia Laboratories.

Some of his work with Sandia included the evaluation testing for supporting and maintaining Intel’s Teraflops Supercomputer (ASCI Red) and design/development of test, evaluation and database software for Sandia’s clusters and supercomputers.

The suite was copyrighted and designated as open source software for use by the scientific community at large.  He has been awarded two U.S. patents, four software copyrights and authored 30 publications.

After retiring from Sandia, Barnette served as an Associate Professor with the Mechanical Engineering Department for LeTourneau University.   He taught classes in Statics, Materials Science, Computer Programming with Python and Raspberry Pi computers. He also has taught classes in Engineering and Vibrations, Mechanisms & Kinematics.  Research projects during that time included parallel computing with Raspberry Pi computers and the beginning stages of working on drone swarms using Raspberry Pi’s coupled with attached flight controller circuitry.

Barnette lives in Veguita, New Mexico with his wife Shelly.  They have three sons – Travis, Trevor and Taylor.

In 1986, he partnered with Harold Nix and began representing plaintiffs in important product liability, toxic tort and other complex civil cases. Patterson has been instrumental in the firm’s success. He has also led Nix Patterson to the forefront of some of the most high-profile litigation in the country.  Under his leadership, the law firm has amassed an impressive list of significant recoveries for a wide-range of clients in diverse practice areas.

Patterson played a vital role in the firm’s representation of the State of Texas in the historic Texas tobacco litigation.

The firm and its co-counsel recovered over $17 billion for the State of Texas. He was lead council for the plaintiffs securing a $45.5 million judgement against Chevron. This is for underpaid natural gas royalties to the governments and to Native Americans.  Patterson was involved in the British Petroleum (BP) litigation representing the State of Florida following the devastating 2010 Gulf of Mexico oil spill.  Nix Patterson and co-counsel were key to the State of Florida securing a $3 billion settlement.

In March 2019, Nix Patterson, obtained a historic $270 million settlement against Purdue Pharma in the State of Oklahoma opioid litigation.  Although the settlement was only with Purdue Pharma, the firm will represent other defendants in a trial in May.  The trial will be the first in the nation that could determine pharmaceutical companies’ role in the nation’s opioid crisis.

Patterson is licensed to practice in Texas, Arkansas and Oklahoma.

Patterson serves on the Foundation Boards of Texarkana College and Texas A&M University – Texarkana.  He is a minority owner of the Houston Astros and serves on their Board of Directors. The new Student Center at Texas A&M University –Texarkana was named in honor of he and his wife, Lois.  Patterson a recipient of the C.E. Palmer Award, Texarkana’s most prestigious honor for public service, a lifetime of altruism. 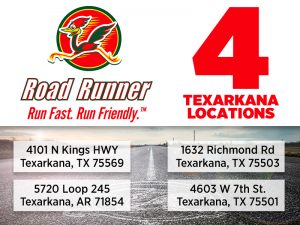 The Patterson’s have two sons, Ty and Chad, and seven grandchildren.

Allen Nance to be Honored by T.I.S.D.

Allen Nance to be Honored by the Texarkana Texas Independent School District. Nance will be inducted into the school districts Hall of Fame.

Pre-K and Kindergarten Registration at T.I.S.D.

Tigervision at Texas High receives big honor. The broadcast entity was named one of five regional winners in broadcast excellence.