HOOKS, Texas – Hooks’ offensive line might block out the sun, leading the Hornets to the promiseland in the dark this football season.

Coach Chris Birdwell doesn’t exaggerate when he talks about the size of his linemen. 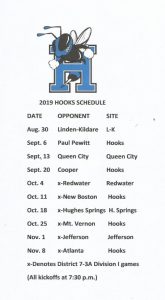 “We feel like our offensive line could be one of the best lines that we’ve had since the 1990s,” said Birdwell, whose team finished 4-6 in 2018, “We’re really going to lean on these guys. They’re big kids. They all move and run well. They’re athletic, and some will have to play defense, because most of our defensive line were seniors last season.”

How big you ask? 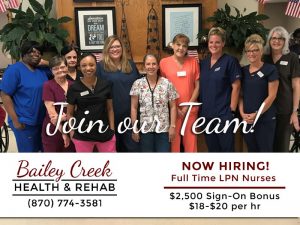 Graduation hit the Hornets hard last spring with 16 seniors saying goodbye. Birdwell likes the fact 55 kids showed up for the first day of practice in August. On paper Hooks still has experience with 15 lettermen back, including seven offensive starters and four on defense.

“We’ve been happy with what we’ve seen so far,” said Birdwell. “I believe we have a team that will be in the mix. We’re playing in one of the toughest 3A districts (7-3A Division I) in the state, with the likes of Atlanta, Jefferson, Mount Vernon and Hughes Springs. If we play well we’ve got as good a chance as anybody.”

“Right now I believe our offense is ahead of the defense, because of the offensive line,” said Birdwell. “A healthy Davarious Clark will be big. He has had some injury issues in the past, but he’s explosive, and can be a game-changer for us. If we can keep him healthy he can be a huge weapon for us.”

Hooks also has quarterback Mason Vasquez back, who started as a sophomore last year. The Hornets have a dangerous receiver in Marquiz Estell. Benji Johnson will be another target for Vasquez. Fullback Kylie Bagby and running back David Johnson are players to watch.

Unlike most 3A schools, Birdwell hates to see players going full-time on the field. Only two players were both ways – offense and defense – in 2018. However, the Hornets’ coach knows that will change this fall.