LINDEN, Texas – LaDavion Johnson (5-6, 150) could easily become Linden-Kildare’s all-time leading rusher in 2019. Coach Derek Simmons says Johnson would trade that record in a second for a District 11-2A Division I championship.

“If you measured kids by heart, LaDavion is the biggest kid on our team,” said Simmons. “In my 28 years he’s in the top five of running backs I’ve ever coached. Pound-for-pound he’s probably the best. He brings something different, and I think his size helps him. He’s got great lower body strength, good center of gravity, and hardly ever takes a clean hit. We’re expecting big things from him.” 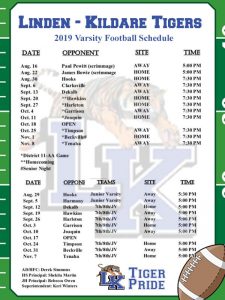 “The only thing LaDavion is concerned about is wins and loses, that’s the kind of kid he is,” said Simmons. “He’s going to be a big part of our offense.”

LaDavion Johnson just part of the equation for L-K

The Tigers have much more than Johnson with eight starters back on offense, and six returnees on defense.

There is a question about who will be starting at quarterback. The position could be one of L-K’s deepest spots. Trey Schuler returns, and he’s being challenged by junior Mason Johnson and sophomore Jonathan Owen. All Three bring something different to the table contends Simmons.

“We would feel confident with any of the three in there,” said L-K’s coach. “It may take both scrimmages before we know who the starter will be.”

Simmons is also excited about the play of tight end/linebacker Nic Kunze, who will be doing his best to replace Ty Patterson, who piled up more than 200 tackles last season.

“Nic has had a great camp so far,” said Simmons. “He’s never played middle linebacker before. Nic has picked up on everything. He’s different than Patterson, being more of a technique guy.” 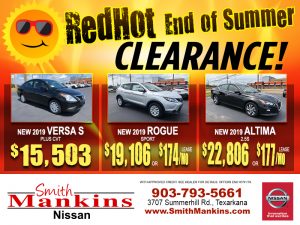 The Tigers’ offensive line features two-way starters Landon Lyles and Hunter Johnson. Sophomore Jackson Lee (6-4, 205) will be at right tackle, with Lyles moving to left tackle. L-K still feels the pain and sorrow of losing center Caleb Taylor, who died tragically last May in an accident. Transfer Gunner Minor is working at center in August.

L-K graduated two of its top three receivers. Simmons said there’s not a player who can stretch the field.

Despite having 50 players show up for the first practice this month, the Tigers are looking for more depth. Eight players went both ways in 2018, but that number could improve depending on who plays quarterback. It could possibly be only five playing both ways.

The District 11-2A Division I race will be competitive, and a challenge for the Tigers to make the playoffs.

“It’s a tough 2A district, one of the toughest in the entire state,” said Simmons. “Garrison and Tenaha are top ten teams. There’s no weak sisters, but we expect to be in the mix. We lost to Garrison and Joaquin back-to-back last season by a combined fourteen points. Depth really took a toll on us last year. Staying healthy is huge at our level.”