ATLANTA, Texas – Atlanta starts the season ranked third in Class 3A Division I according to Dave Campbell Magazine. If the Rabbits start the season 4-0 they’ll likely be No. 1. If they’re 1-3, Atlanta will probably still be in the top 10. 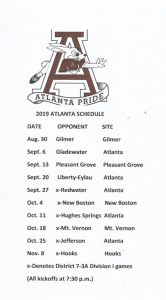 The Rabbits are expected to repeat their 2018 performance. They have expectations of a state championship, but Atlanta will have to get past Grandview and Malakoff in the postseason. That’s in addition to surviving Gilmer, Gladewater, Pleasant Grove and Liberty-Eylau to start 2019. Then there’s Jefferson, Mount Vernon, Hughes Springs and Hooks in District 7-3A Division I.

“I don’t expect it’s going to be any different,” said Atlanta coach Matt McClure. “We’ve arguably got one of the toughest schedules in 3A. It’s obviously going to be a huge challenge for us, but we do have some guys who played in fourteen games last year. We’re betters off this year that last year’s experience. I think we’re talented.

“We’re a little deeper on the offensive and defensive lines than we have been. I think this team can match or better last season, but we have a long way to go. We have the potential to do that.”

Just in case you forgot the Rabbits finished 8-6 last season after starting 0-4. They lost in the Region II-3A final to Malakoff.

McClure greeted 24 returning lettermen in August, including six starters on both sides of the line.

Among the returnees are running backs Caleb Hamilton and Dra Nelson. The two combined for nearly 2,000 yards on the ground last year.

The question is who will the quarterback be? Some were guessing it could be sophomore Cooper McClure, but it looks like Kade Wood will get the nod.

“Kade was our leading receiver the last two years,” said McClure. “The real question is will we be better on defense. Right now I feel better about our defense than last year. We always rotate the front three guys. We played six there last year, and four of them are back. Our middle linebacker Connor Samples is back, who had 150 tackles last season. We’ve got two of our secondary people back. There’s guys returning at every level.”

Expectations were high for Atlanta after dropping in classification. McClure knew it wasn’t going to be easy. A loss to Jefferson in district proved heart-breaking, but didn’t stall the Rabbs’ postseason journey.

“Jefferson has a back (Dee Black) that nobody could tackle last year, and a quarterback (Kylan Thomas) who is really electric,” said McClure. “They’re obviously going to be very good. There’s excitement with Coach Art Briles coming in at Mount Vernon. Hughes Springs is always in the playoffs, and Hooks has talent year in, and year out. I think Redwater and New Boston are building something.

“We’ve just got to stay healthy through the first four game. Getting to district healthy will be a huge factor in our 2019 season.”