Maud has a new coach with Josh Turner taking the reigns. It reports 35 players are out for football, which is actually up a little bit from 2018. He hopes to field a junior varsity team, leaving him with a varsity roster of 17-20 players. 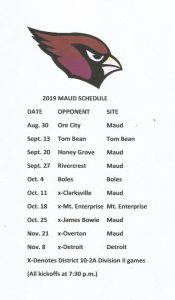 “Maud played a lot of young kids last season, including a lot of freshmen,” said Turner, who previously coached at Queen City, Brownsboro and Tyler Chapel Hill. They’re going to have growing pains, which had a lot to do with last year’s record (1-9).

“Our goals are to compete in every game we play, with a chance to win at the end. If we take care of business we have a chance to be on the winning end more often than not. We had a modified off season when I got here. I have a pretty good idea where our kids were at.”

It looks good for the Cardinals on paper with nine returning starters on both sides. Problem is all nine could be playing both ways.

Offensive line is a strength for Maud

“I think our offensive line will end up being our strength,” said Turner. “We’ve got good size and move well, but need depth. There are some guys who have not contributed, and now they need to step up. Briley Barron (6-4, 250) is a freshman who could help us.”

Rayne Bailey has been moved from running back to quarterback. Payton Windham is also back at quarterback. Sophomore Tucker Sanders (5-11, 175) will be in the backfield with Bailey

“We’re going to go as Rayne goes,” said Turner. “He’ll be under center, and in the shotgun a bit. We’re going to run the football, but I think we’ll be able to throw.”

Turner is confident the Cardinals’ defense will be sound.

“There’s a lot of defensive starters back on defense,” he said. “The defensive coordinator is back so we’re not having to learn a whole lot of new schemes. I like the way we’re flying around and moving to the ball right now.”

Hicks, Bower, Pate, Daniels and Dunn are among those in the defensive trenches. Bailey, Windham, Hall and Sanders are the linebackers. Windham was the Redbirds’ leading tackler in 2018.

Maud’s 31-year-old head coach notes preseason scrimmages with Prairiland, Como-Pickton and Beckville will tell him if his team is ready for a challenging schedule. The Cardinals open with 3A Ore City.

Defending champion Clarksville is picked to repeat in District 10-2A Division II. Detroit, Mount Enterprise and James Bowie appear to be the schools blocking Maud’s path to the postseason.