It’s unusual to say the least for a player, or players on the short end of the scoreboard earning the Dewey Moore Ford/Fox Sports Texarkana Player of the Week honor. 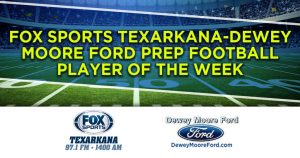 Liberty-Eylau players are the exception to the rule this week after the Leopards’ effort in a 63-42 loss to Argyle, the top-ranked team in 4A Division I.

This week’s Dewey Moore Ford/ESPN Texarkana Player of the Week is Nashville’s Jhonny Pioquinto. The Scrappers’ place-kicker booted a 30-yard field goal with 21 seconds left in the game as Nashville upset top-ranked Arkadelphia on the road, 22-21. The Badgers have won the last two 4A state championships.

Linden-Kildare’s LaDavion Johnson returned an interception 45 yards for six points on the game’s final play to preserve the Tigers’ 29-21 win over Harleton. Johnson also ran for 134 yards and a touchdown to earn the Dewey Moore Ford/KPYN recognition.