Pleasant Grove has clinched at least a share of its third straight district football championship. The Hawks can avoid a tie and capture the top playoff seed Friday at Hawk Stadium with a win over Spring Hill.

That task will be tougher than expected earlier this season, since the Panthers are still vying for a share of the crown.

“One poll has Spring Hill ranked ninth in the state, and justifiably so,” said Pleasant Grove coach Josh Gibson. “They played Silsbee a couple of weeks ago, which was a final four team last season that almost beat Cuero. They beat Silsbee in pretty good fashion, and lost to Gilmer by a touchdown. Spring Hill has some great weapons.”

The Panthers’ main weapon will be quarterback Gage White. Gibson is impressed to say the least.

“White is one of the best passers in East Texas,” said Gibson. “He’ll play at the next level (college). He’s a gamer, has a great arm, and is extremely accurate. Spring Hill spreads you out and makes big plays. I think they could be a team that plays a few rounds in the playoffs.

“We can’t have any defensive busts, giving them an easy touchdown. There’s got to be pressure on that quarterback, which I think we’ll do. They throw lots of screens, and hopefully we can get our hands up and knock some balls down and create some havoc.”

Pleasant Grove has it’s own talented signal-caller, that Spring Hill will have to defend. Senior Ben Harmon has thrown 17 touchdown passes this season from the Hawks’ run-oriented offense.

“Ben has college offers, he’s a winner. He was Dave Campbell’s preseason player of the year,” said Gibson. “I wouldn’t want anyone else leading our team. He’s the perfect fit for us.” 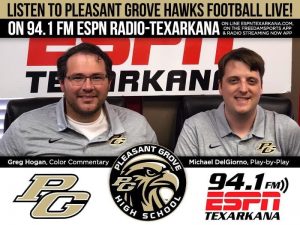 The Hawks did suffer a big loss in their last game when senior offensive lineman Connor Stanfill went down with a knee injury. He’ll need surgery, and his schoolboy football career is over.

“Connor’s injury is similar to the one Landon Jackson had last season,” said Gibson. “It’s unfortunate that we lose him. He’s been with the varsity since his sophomore year. He’s a leader, and the anchor to our offensive line. Your heart breaks for him, but he’ll still have an impact, coming over and coaching up the offensive line.”

Pleasant Grove (8-1, 3-0) will have a bye after this week, and two weeks to prepare for its first playoff game. Spring Hill must still play Pittsburg, which could tie the Panthers with wins over Liberty-Eylau and Spring Hill. That’s presuming the Hawks take care of business Friday night.

L-E can still qualify for the postseason with a win over Pittsburg Friday, and a Spring Hill win over the Pirates next week.