The Eagles led third-ranked Mid-America University most of the game Tuesday at the Patterson Student Center. An eight-point lead disappeared in the final 10 minutes as the Oklahoma City team won, 90-81.

“We slowed down offensively and defensively in the second half,” said Wall. “We’ve got to continue to play at a high level, and play fast.”

Wall’s squad has reenforcements on the way Dec. 12, but says he’s not sure what that will mean in regard to TAMU-T’s success in future games.

“What I’ve got right now is my team,” said Wall. “We’ve got plenty of what we need with the guys playing now. We’ve got to continue to chip away, and want to buy in and play hard. At the end of the day, tonight’s game is still a loss. We’ve got to figure out a way to get better, and where to get better. Then we can take that and run with it, because it’s a long year.”

Tuesday’s contest was a game of runs. Texarkana would build a six-to-eight point lead, only to see the Evangels rally back. This happened five times, the Eagles taking a 44-40 lead at intermission. 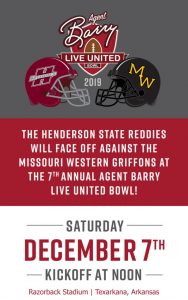 Two quick steals and baskets gave TAMU-T an eight-point edge 20 seconds into the final half. The host team was still leading by eight with 11 minutes remaining. That’s when 6-7  senior Cedric Wright started dominating play inside. He scored 12 of his 18 points in the final 15 minutes, including a layup that put MACU up for good with five minutes left.

That lead grew to eight, but the Eagles pulled within three on two occasions. Desmond Kennedy buried his fourth 3-pointer of the game on one occasion, and Connor Ouellette scored to make it 81-78 with two minutes remaining.

Senior Ashford Golden was the difference for Mid-America. He scored 15 of his game-high 26 points in the first half to keep the Evangels close. He also pulled down a game-high 12 rebounds, the smaller Eagles whipped on the glass, 41-34. Damarius Brooks contributed for the winners with 14 points, including four treys.

Kennedy, the Eagles’ leading scorer this season, led his team with 22 points. Ouellette continued his outstanding play with 18 points, and a team-high seven rebounds. Anthony McGee poured in 17 points, but only four in the second half.

TAMU-T pressed the Evangels the entire game, forcing 17 turnovers, 10 in the first half. Mid-America shot 48 percent from the floor, while the Eagles made 42 percent of their shots.

Both A&M-Texarkana’s men and women begin play in the Red River Athletic Conference Saturday in Marshall against Wiley College.