The incidence of fatal accidents involving drivers who test positive for marijuana doubles after legalization for recreational use.

So says new research from the AAA Foundation, which took a look at a five-year period from 2008-12 in the state of Washington where marijuana was not legalized for recreational use. An estimate of 8.8% of Washington drivers involved in fatal wrecks were positive for THC, the active ingredient in marijuana.

In the next five-year data set the AAA Foundation looked at from 2013-17, after marijuana was legalized for recreational use in Washington in December 2012, the rate of drivers involved in fatal accidents testing positive for THC doubled to 18%.

The AAA Foundation research focused only on the prevalence of drivers testing positive for active THC and did not make determinations on if marijuana contributed to the crashes.

“This study enabled us to review a full 10-years’ worth of data about the potential impact of marijuana on driving safety – and it raises significant concerns,” said Dr. David Yang, executive director of the AAA Foundation for Traffic Safety. “Results from the analysis suggest that legalization of recreational use of marijuana may increase the rate of THC-positive drivers involved in fatal crashes.” 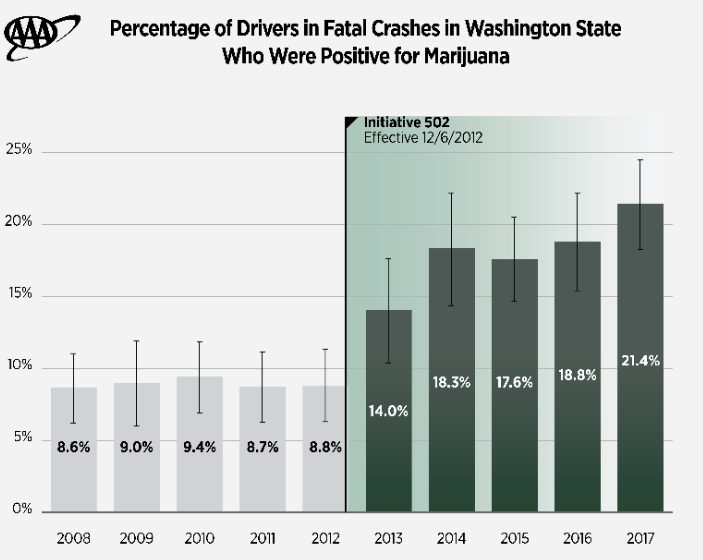 Marijuana use can cloud judgment, slow reaction times, and inhibit concentration. The effects vary according to the individual, but studies have concluded that marijuana use impairs the ability to drive safely. The AAA Foundation says that previous research indicates drivers who are high are twice as likely to be involved in a wreck.

According to a 2019 AAA Foundation survey, nearly 70% of Americans think it is unlikely the police will catch a driver for driving shortly after marijuana use. According to the survey, an estimated 14.8 million drivers reported getting behind the wheel within an hour after using marijuana in the past 30 days.

Recreational marijuana is legal in 11 states and the District of Columbia.

Prices continue to drop for gas in Texarkana

Gas prices continue to fall in the city of Texarkana. According to data released from AAA Texas on Thursday, the average price for a gallon of regular unleaded gasoline in the Texarkana area was $1.72, […]

Gas prices in Texarkana fell by one cent over the course of the past week. According to data from AAA Texas, the average cost for the price of regular unleaded gasoline fell from $2.22 to […]

Tyler and Texarkana tied for 4th-cheapest gas in Texas

The Tyler and Texarkana metro areas are tied for the fourth-cheapest gas in the state of Texas at $2.24 a gallon. According to new data released by AAA Texas, the average price for a gallon […]