Somebody once mistook me for Johnny Green. Still don’t see the resemblence, but that was the best compliment I’ve ever had.

It was the spring of 1972 when I walked into the Texarkana Gazette’s editorial office for a job interview. Don’t know what Johnny’s first impression was, but he hired me. He would hire me two more times after leaving Texarkana for greener pastures.

That’s when I figured Johnny actually liked me. Maybe it was just because there was nobody else in the city that he could beat in golf. Can’t tell you how many rounds of golf we played together. It was a lot, and he won most of those matches. When I did get lucky, my wins became legendary in my mind.

It’s a rare day indeed when an 18-handicapper beats a legend. That’s right, Johnny Green is as much a legend as Billy Sims, Durwood Merrill, Jeremiah Trotter. Hooks, Texas, has certainly had its share of celebrities, and Johnny ranked second to none.

The editors and reporters that used the Texarkana Gazette as a stepping-stone for bigger and better days envied Johnny’s leadership and journalistic knowledge. None more than myself, and any other reporter who had the opportunity to be on his sports staff.

Bowie County was Johnny’s birthplace and Hooks his home. I do not exaggerate when saying he could have been the Sports Editor of most big city newspapers. Like highly successful coaches, Johnny had opportunities to go to bigger newspapers. But spending his best years writing about the high schools, coaches and athletes in Northeast Texas was his dream job.

Johnny the fan, loved the Chicago White Sox. The Dallas Cowboys had a place in his heart when I first met him. Never understood, but he tired of driving to Irving to cover the Cowboys, letting me go instead. Christmas time it wasn’t unusual to see Johnny donned in some new threads with a White Sox, or a Duke Blue Devils logo on it.

Life for Johnny peaked in the 70s, 80s and 90s. He had already married his high school sweetheart Karen. They raised three beautiful kids, all inheriting a portion of Johnny’s wit, humor and intelligence.

Biased I may be, but the Texarkana Gazette Sports Department ranked among the best in the Four States Region. Under the leadership of Johnny and the late James Williams, who was a legend in his own right. When James graduated from Arkansas Tech, even his education was extended under Professor Green.

The 90s were arguably our best years. General Manager Buddy King is an avid sports fan. He knew there was something special about Johnny, and spent his spare time upstairs visiting and talking sports. When they retired about the same time, it made me wonder if they knew something I didn’t know. There was a recession in 2008 that many newspapers haven’t survived.

Johnny used his brilliant judgement on the athletic field, too. He played basketball at Hooks High School, but umpiring baseball at every level was just another way of contributing to his community.

If you asked the mayor of Texarkana, Texas, if he was a good umpire, guarantee you the answer would be positive. There are doctors, lawyers, coaches and thousands of others that Johnny called safe, or out. Most of these local citizens today call him friend.

Johnny was also a big reason American Legion baseball flourished during the summer months in Texarkana. Remember him raising thousands of dollars for the Texarkana Indians program one season with a charity basketball game between Clarksville, Texas, and Saratoga, Ark.

Johnny may have left the building in 2011, but his writing career wasn’t over. He worked part-time for the Gazette, and the last couple of years as a blogger for Fox Sports Texarkana Radio. He kept statistics for Texas High football coaches, was the official scorekeeper at Tiger basketball games, and the pitch-counter during baseball season.

With all that said, he spent most of the past decade visiting his grandchildren. He loved his family, something else he taught me.

We blame cancer for taking Johnny away from us. Never knew him to be really sick for more than 40 years, although he struggled with diabetes for years.

When he didn’t feel like finishing a round of golf last November, there was reason to be concerned. We played our final round last December, and he beat me. That day I just took it for granted he was getting better. 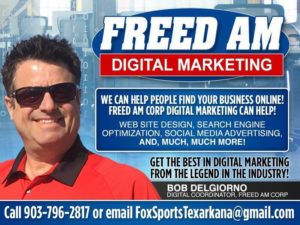 Johnny and I never talked a lot about religion, but he found his faith in God a few years back. His swearing on the golf course came to an end. When I occasionally won he demonstrated good sportsmanship. Figure it was something else he was trying to teach me. Down deep I was scared to death something was wrong.

I’ve never tried to hide my professional respect and special friendship with Johnny. Never had so much in common with one individual. We even loved the same kind of movies, but most of all we loved high school sports and the kids we were getting to know.

Johnny didn’t just make me a better writer, but also a better man. That’s the best thing I can say about Johnny Green.