Pleasant Grove Hawks quarterback Ahkhari Johnson was named 7-4A  co-offensive player of the year.
Fox Sports Texarkana and ESPN Texarkana learned about the honor bestowed upon Johnson less than 24-hours after his final game of the season Friday, a regional final defeat at the hands of the Carthage Bulldogs.
Johnson, a junior put up huge numbers on the field and excelled in the class room.
On the field, Johnson led his Hawks 4 weeks deep in the post season. Johnson completed 86 of 170 pass attempts for 1,710 yards and 21 touchdowns while only allowing 4 interceptions. Johnson also rushed 117 times for 856 yards for 12 touchdowns.
Johnson played offense, defense and special teams. He also has the utmost moral character.

“Ahkhari Johnson is the  epitome of what you want in a quarterback. He’s extremely talented, but more importantly, he’s humble and selfless,” Pleasant Grove Hawks head football coach Josh Gibson said. “His GPA is off the charts and he is a teacher’s dream.”
“So many with his talent want it to be all about them, Coach Gibson said.  “Ahkhari is a team first dude.  He doesn’t post about himself or his accomplishments. He lets his play and character do the talking.  He’s not an ego guy.” 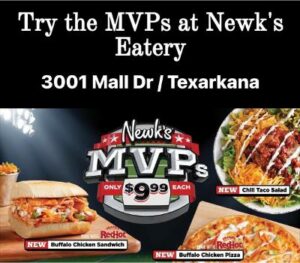 Pleasant Grove is blessed to have so many kids in the athletic program like Ahkhari, Coach Gibson said.
Fox Sports Texarkana 97.1 FM and 1400 AM and 94.1 FM ESPN-Texarkana agrees with coach Gibson.

Everyone at Fox Sports Texarkana and ESPN Texarkana would like to thank Pleasant Grove ISD for letting us call their games live on the radio and look forward to calling Ahkhari and his teammates football games next year.

“With our stations, it’s all about the kids. PG’s kids, led by guys like Ahkhari are some of the best,” Bob DelGiorno at Fox Sports Radio and ESPN Radio in Texarkana said !